The European logistics market is changing rapidly. Supply chains are being restructured, economies are expanding and e-commerce is accelerating. To understand how these changes are affecting the real estate market and location preferences, Prologis Research and eyefortransport (eft) polled logistics operators across Europe to find out which criteria are most important and which locations are thriving. The survey was conducted from February to May 2017, with 280 respondents across sectors ranging from retail to automotive to electronics.

This report follows on from our findings about location decision drivers, where we identified five factors that shape new location selection in Europe. These factors, including the country rank of 100 European locations, are:

Major findings from our research:

What Does This Mean?

Investment in infrastructure and labour availability are key to the success of a logistics hotspot. Labour availability and proximity to economic networks drive location decision-making for logistics users. Therefore, to enjoy the wave of logistics growth, policymakers should encourage investment in infrastructure and availability of a qualified workforce. It is crucial for investors to understand these long-term drivers of demand. While other components (e.g., supply dynamics, cap rate compression, etc.) are important to long-term value creation, an understanding of customer dynamics and shifts in logistics networks is vital for making the right investment decision.

1. Immediate access to major consumption centres is paramount. Access to the gateways of global trade, economic networks and workforce availability are the most important location criteria for logistics operators. The logistics corridors and metropolitan areas in Benelux and Western Germany best exemplify these characteristics. Northern Europe has a high consumer density and well-developed transport networks, so it is no surprise that these locations achieved high scores for proximity and infrastructure. Dutch markets scored particularly well for regulatory systems and multimodality. Many individual markets are well- positioned, including Venlo, Amsterdam-Schiphol, the Antwerp-Brussels corridor (E19), Hamburg, Stuttgart, Antwerp-Hasselt corridor (E330) and Central and East Brabant.

2. Major population centres with the highest consumption are increasingly important. In this year’s survey, large metropolitan areas like London, Paris, Milan and Berlin moved up in the overall rankings. Like logistics corridors, metropolitan areas perform well because they are close to consumers and support an efficient supply chain. Logistics real estate customers are increasingly considering supply chain costs in their totality, and they are increasingly favouring proximity to economic networks and customers/suppliers to deliver goods to consumers as quickly as possible.

3. Importance of overall costs was comparatively low. Historically, logistics has focused on minimizing costs. However, with supply chains increasingly viewed as a competitive asset, value-based judgments are increasingly part of the calculus. Many traditionally more expensive countries and markets scored well among our survey participants, including the Netherlands, Germany, Belgium, the UK and France.

4. Rising importance of labour, either in proximity as in Western Europe (like the Netherlands) or in cost such as in Poland. With changing demographics and increased levels of value-added services in logistics facilities, availability of qualified staff has become a structural as well as a cyclical driver in location selection. Markets in Western Europe like Southern Netherlands and Rhein-Ruhr house large labour pools and score relatively high on the labour location driver. The availability of a flexible and qualified workforce is an aspect of operational efficiency that is increasingly important to the logistics sector. Poland scored well in multiple categories and is among the fastest- growing logistics markets in Europe. In fact, Central Poland-Lodz was the first market outside
Western Europe to win a spot in the top five locations. CEE is a relatively young market and only became part of the European logistics network in the early 2000s, when CEE countries joined the EU. Demand in this region is driven by its emerging middle class and final assembly industry. 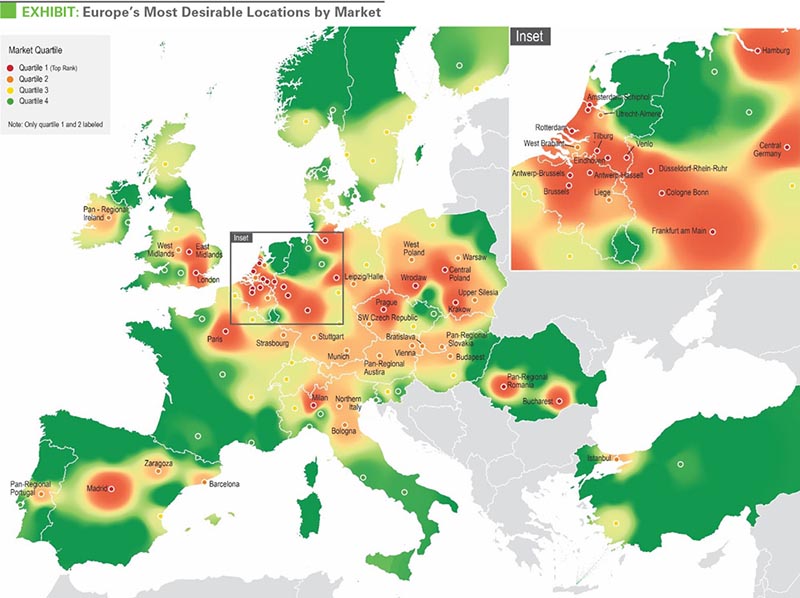 The UK logistics market is distinct from continental Europe. Top markets include London and the Midlands.Naturally, London scored well among survey respondents due to the size of its consumer base. The Midlands scored well for its proximity to consumers (East better than West), but also infrastructure and the support that municipalities provide to the logistics industry.

As one of the crossroads of trade within and into Europe, the Netherlands ranked consistently as a top destination. Top markets (in order) include Venlo, Rotterdam, Amsterdam-Schiphol and Central Brabant. Survey respondents differentiated these markets across their accessibility to major consumption centers (e.g., Venlo vs. Rotterdam), infrastructure and the support their municipalities provide to the logistics industry.

As an economic engine of Europe, Germany consistently ranked as a top logistics hotspot. The populace and logistics market is spread across many markets. Top markets (in order) include Düsseldorf Rhein-Ruhr, Central Germany, Frankfurt, Cologne Bonn and Hamburg. Clearly, proximity to trade from Northern European ports and distribution onward to locations elsewhere in Germany were a differentiator, as was the presence of a large consumer base.

This logistics market has grown notably since the opening of its national borders. The growth in industrial activity coupled with the expanding consumer class mean that logistics is driven by both ends of the supply chain. Ranked as a top-3 country across multiple metrics, Poland scored well, as it offers a strong value proposition, proximity to Western Europe and extensive transportation infrastructure. Top markets include Central Poland-Lodz (top 5 location), Krakow, Wroclaw and West Poland—each representing different mixes of these features.

Institutional logistics real estate in these markets was built post-2000—a young market compared to Western Europe. The region offers a pro-growth business environment and low costs, attracting logistics businesses, especially those with a higher labour component such as light manufacturing or more labour-intensive distribution. Top markets include Bucharest and Prague.

Domestic consumption is the primary driver for Italy’s sizeable economy, which has limited links to external economies in comparison to Western Germany and Benelux. As such, it did not have a top-5 ranking in any key location criteria category (although it scored consistently across the different location factors). Among Italy’s many markets, Milan was naturally the top-ranked following from its economic scale and existing infrastructure. Preference for Milan increased the most among large markets relative to our last survey in 2015. Among smaller markets, Bologna stood out ahead of all others, benefitting from its central location, multimodality and ability to reach much of the Italian population.

Much like Italy, as a large and established economy, but one with lower links to global economic activity, trade and links to other major population centers, Spain also did not reach a top-5 ranking in any key location criteria category and scored also consistently across the different factors. Madrid clearly was the favoured location, as a major population centre with a supportive market environment and infrastructure.

The country’s ranking was mixed, lifted by the size of its large economy and the quality of the road infrastructure, but limited by the labour environment and, in general, the cost/value dynamic. Among France’s many markets, Paris was naturally the top-ranked market given the size of the market, the size of the logistics industry and labour pool. The ranking for Paris was among the most improved of large markets since our 2015 study.

Across the 100 locations included in this study, some notable results can be observed. Venlo in the Southern Netherlands scored high across the five different factors that shape new location selection and can be viewed as Europe’s most desirable location. Markets in Benelux and Western Germany have a high consumer density and well-developed transport networks, so it is no surprise that these locations achieved high scores for proximity to major consumption centres and transportation infrastructure. Dutch markets scored particularly well for regulatory systems and multimodality, two important drivers for markets concentrating on pan-European distribution. Düsseldorf Rhein-Ruhr is another submarket that achieved high scores across the different factors. Rhein-Ruhr is centrally located in one of Europe’s most densely populated markets and therefore scored particularly high on proximity to major consumption centres. Compared to previous survey results, Düsseldorf Rhein-Ruhr showed the strongest improvement in the top 10 in this year’s survey. Markets in Poland scored well in multiple categories. The Polish market is maturing and Central Poland-Lodz is the first market outside Western Europe to win a spot in the top five. 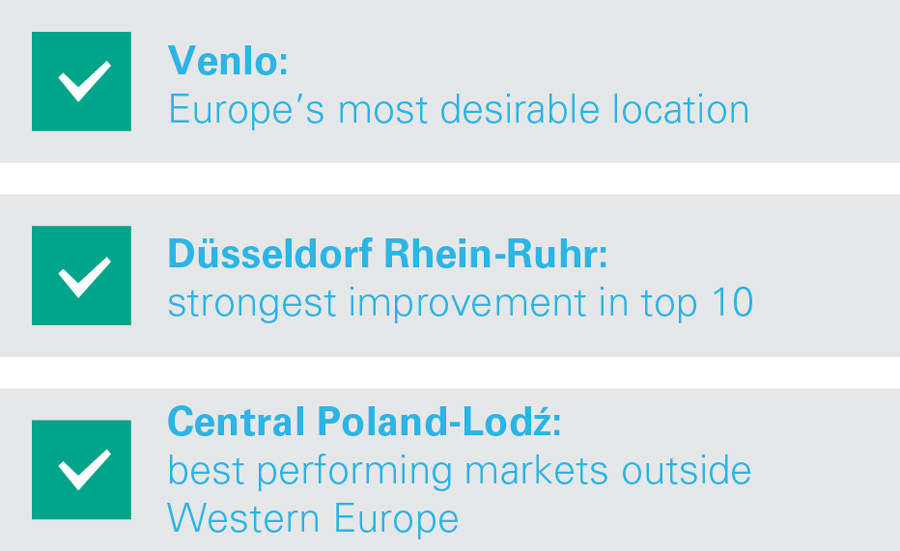 Prologis, Inc. is the global leader in logistics real estate with a focus on high-barrier, high-growth markets. As of June 30, 2017, the company owned or had investments in, on a wholly owned basis or through co-investment ventures, properties and development projects expected to total approximately 684 million square feet (64 million square metres) in 19 countries. Prologis leases modern distribution facilities to a diverse base of approximately 5,200 customers across two major categories: business-to-business and retail/online fulllment.