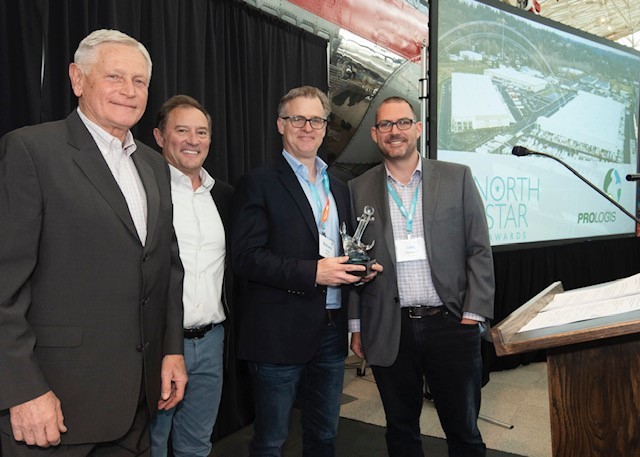 The Cargo Anchor Award recognizes businesses that drive economic activity for the Puget Sound region. It is given to businesses and projects that increase cargo volume in the Seattle/Tacoma gateway.

Prologis was nominated for two projects: Prologis Park Tacoma, a 1.3 million square foot logistics park, and Prologis Georgetown Crossroads, a 590,000 square foot multistory infill distribution center near Seattle and the first of its kind in the United States.

“The Cargo Anchor Award recognizes contributions that companies make to the long-term success of the Northwest Seaport Alliance gateway while promoting trade and economic development in the region,” Jake explained. “Winners are selected based on their measurable net contribution to increasing marine cargo volume in the gateway and related jobs generated from specific initiatives, improvements or investments.”

Prologis stands in solidarity with the Black community in speaking out and acting against racial injustice, hatred and violence.

Read more In Solidarity
Prologis’ Moghadam Interviewed by The Economist

Prologis’ Moghadam Interviewed by The Economist

Prologis chairman and CEO Hamid R. Moghadam was recently interviewed by The Economist to discuss why distribution centers and logistics properties are...

Prologis chairman and CEO Hamid R. Moghadam was recently interviewed by Bloomberg TV’s “What’d You Miss?” to discuss the evolution of global supply...

Prologis Research has published the fourth installment in their series regarding COVID-19 and its implications for logistics real estate. This report...