2017: A Year of Accelerated Rent Growth

Why does it matter?

Key findings from our 2017 survey.

What does it mean? Our study reminds us that real estate is inherently local. Key themes by stakeholder:

For customers, securing quality space remains challenging. In many markets, rent growth in recent years has been materially ahead of local consumer price indices. For customers who only lease space periodically, growth over multiple years means rents may be 20% higher, or more, than the last time they leased space. Moreover, the combination of low vacancies, improving economic growth and rising replacement costs suggests that rents will continue to rise in 2018. Forward-thinking customers with a thorough planning process and the ability to act quickly stand the best chance of meeting their real estate requirements at the most attractive price.

For investors, valuations in high-growth environments can be difficult. Rapid market rental rate growth means local knowledge is critical. In-place rents are materially below market, principally in the U.S. At the same time, the recovery has expanded and more markets are enjoying rent growth. Looking forward, local market supply/demand dynamics should underpin market rental growth. Markets with higher barriers to supply and very low vacancies will see customers competing for space and driving up rates.

U.S. market rental growth remained the highest in the world and and grew by 9% in 2017. However, there was significant stratification among markets, submarkets and size categories. The double-digit pace of rent growth in large coastal markets was more than twice that of markets with lower barriers to supply. Similarly, within markets, infill submarkets tended to outperform associated non-infill submarkets. Finally, with new supply largely focused on larger product, rent growth for smaller-sized buildings outpaced that of bulk space after considering differences between markets. 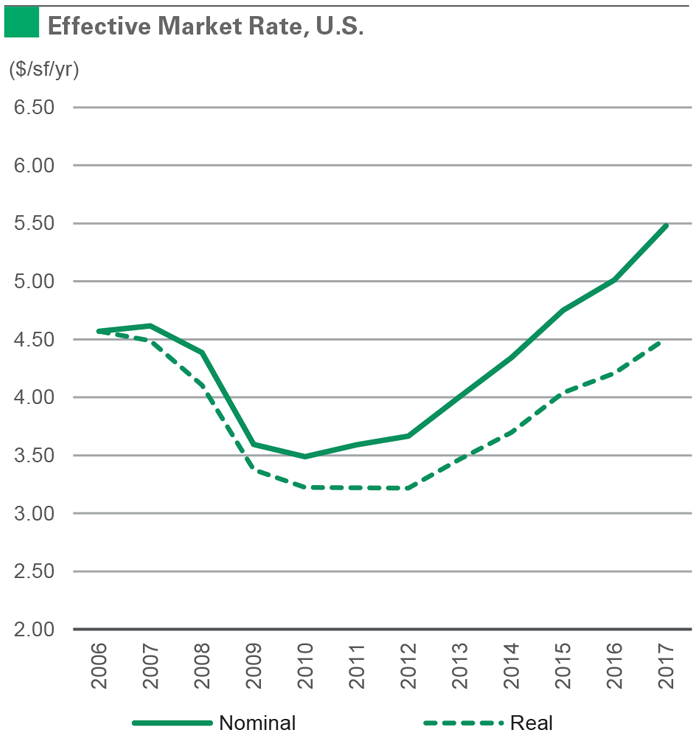 Rent growth in the West is outpacing other regions. Seven of the ten top-performing markets are in the West. In 2017, market-wide net effective rent growth ranged from nearly 8% in Denver to more than 15% in Seattle. High barriers to new supply, access to key global trade gateways and healthy economic growth support outperformance in these markets.

New supply is holding back rent growth in relatively few submarkets. A number of markets/submarkets we flagged as at risk of oversupply experienced below-average to negative rent growth in 2017. Trends were largely isolated to bulk product in these markets, with smaller-sized facilities recording healthy rent growth. These markets include Louisville, Indianapolis, Henry County (Atlanta) and South Dallas.

Multiple trends are aligning to lift rental rates. A lack of land and labor continues to limit new supply and should spur further customer competition for space in high-barrier markets. In lower-barrier markets, rising replacement costs are poised to require higher rental rates to justify new supply, particularly as cap rates level off. Through our data and conversations with customers, Prologis Research sees greater willingness to pay for premier locations and less substitution for adjacent markets than in past cycles. Rising service level expectations throughout the industry are driving this trend, and customers are prioritizing fast and reliable delivery to consumers. This structural shift underscores the stratification of rent growth by location and gives us a more optimistic outlook for future rent growth potential, particularly in high-barrier markets and submarkets.

In Europe, market rental growth improved in 2017, but the composition of growth has been varied. Net effective rents rose nearly 3% in 2017, a slight improvement over 2016. However, the geographic drivers of growth are shifting, as continental EU improved considerably in 2017, with rental rates rising 3%, up from less than 2% in 2016. Northern European markets led the acceleration, but many markets across Southern and Central Europe improved, as well. By contrast, growth remained positive but slowed in the UK; rents there rose between two and three percent on a net effective basis.

Changes in the macro backdrop have helped to drive growth rates. On the continent, improving economic growth and customer sentiment, coupled with low market vacancies and disciplined supply, has led to a normalization in concessions and some bidding up of headline rates by customers. However, in the UK, slowing economic growth and uncertainty has led to more cautious decision-making and a slower pace of demand growth. Headline rents rose—but concessions rose, too.

The recent escalation and acceleration of replacement cost growth is boosting the rental rate outlook. Buildings under construction today still cost less to build than they did in the mid-2000s. However, pricing is changing on a real-time basis. Construction costs are rising by 4-6% per annum across the continent.4 Faster growth is occurring in the best economies and in the most active development markets, even in typically low and steady inflation markets like Germany. Some markets are building more than they ever have and are running into capacity constraints. Labor, materials and the availability of general contractors and skilled subcontractors are all factors.

Conditions are poised for a further acceleration on the continent. Market vacancies have fallen to their lowest point on record, and macroeconomic activity and customer sentiment are becoming stronger catalysts for growth than in prior years. Development has been disciplined and most activity has been build-to-suit with very little speculative activity. In addition, construction cost increases are expected to continue. One offset could be cap rate compression; cap rates have compressed by more than 250 bps in the current cycle, creating a lot of value in the process, but this has been a headwind to rental rate increases.5 Cap rates may compress further, but would need to compress significantly to fully offset higher replacement costs.

In Asia, mature supply and demand cycles are translating to rent growth, but conditions are varied by market and submarket. Differences are closely tied to barriers to supply and local market conditions. Highlights by major regions include:

In Latin America, conditions are varied and subject to local economic conditions and barriers to supply.

2. Replacement costs are spiking. Led by labor rates, construction costs are rising at multiples of inflation in many markets around the world. High and rising land values also are a factor. Taken together, cost increases have contributed to greater developer discipline in the current cycle.

3. Room for increases. Rents remain low on an inflation adjusted basis. In addition, rents represent a small share of total and supply chain costs—big increases in rents do not have a big impact on cost structures. Yet, the choice for superior real estate facilitates big improvements in capabilities and service levels.

4. There is a greater emphasis on quality. More than ever, customers have a sharper view on the locations and types of buildings necessary to meet the demands of modern supply chains. Their answer is to increasingly demand high-quality and infill locations, those in and near major population centers. New development is especially difficult (or, impossible) to introduce in these locations, meaning vacancies are low, and customers compete more intensely for availabilities, pushing up pricing.